One of the biggest myths about travel writing that I’ve encountered is about the pay for travel content.

For years, people have been going around saying there is no pay for writers anymore. Yet somehow a lot of us still earn a living this way.

Yes, a number of magazine have closed, shuffled their staff (a.k.a. fired everyone and hired new people), or moved headquarters even in just the five years since I’ve been doing this job full time.

I personally know folks who’ve worked for small publishing companies that put out a number of magazines with the same staff who walked into work one day to find that the whole company was shutting down.

We have certainly passed through a sort of Great Depression of publishing. But “passed through” is perhaps the most key part of that sentence.

Do you know what the odd thing is about the actual Great Depression in America? Or World War II in Europe? In my travels, I consistently come across old, successful, thriving businesses that opened just a year or two or five before these catastrophes and weathered not only those storms, but all the ones that followed.

Good businesses slim down, pivot, and find ways to move ahead in a new climate. And that is what a lot of publications have done.

Even the venerable and ethics-obsessed New York Times has moved into the brave new world of content marketing. Publications know that they have to court the advertisers who pay their bills better and more closely than ever before.

And as a lot of content has moved to the web as print versions slim down, there are more opportunities for freelancers to break in to low-risk assignment areas (as in, if you flake as a new-to-them freelancer, it’s easier for the magazine to fill the hole).

Magazine staffs have slimmed down, causing many talented folks to become freelancers. That also means that many magazines now need a substantial stable of freelancers to do work that was previously done in house.

As magazine owners demand more and more from increasingly stressed staffs, freelancers have a wonderful opportunity: 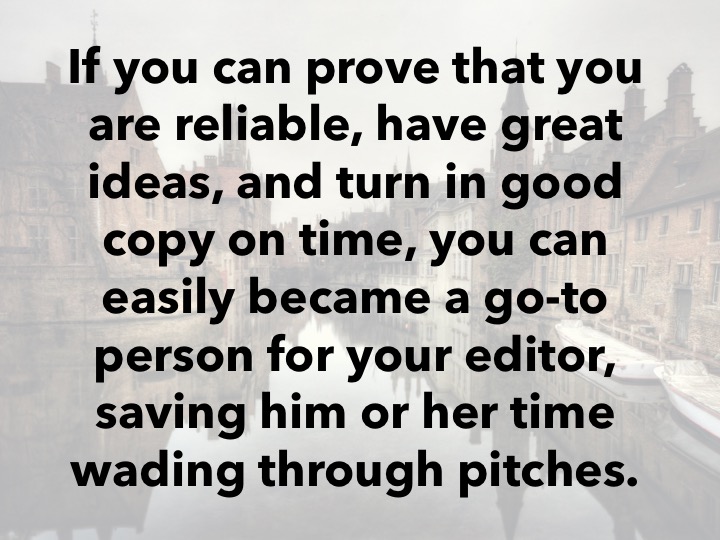 But what’s the point of being on an editor’s “good list” if there was no money in it, right? Especially when we can get paid so handsomely for writing for travel companies.

I’ll share some more specific numbers on types of articles and publications later in the week. For now, let me tell you a few experiences that I’ve had as I gained my footing in this industry.

There are times when, in order to get a particular clip (published article), you decide for yourself (not because a low quoted rate forces you to) that you don’t care what a magazine pays. You decide to pitch anyway, even though you don’t know what, or if, the magazine will pay for travel content.

Because, to be honest, knowing exactly what a magazine pays in advance is tricky business. They often offer different rates to different people based on experience. Or pay a very different range of rates based on where the piece appears in the magazine. (I’ll share a quick strategy on how you can figure out if a magazine is worth your time tomorrow.)

While there are some outliers, I’ve found that time and time again, when I decide that I’m going to write the piece whatever it pays, I’m truly surprised by the rate.

For a very niche publication from a large regional publisher—though the magazine would be considered a “newsstand” magazine because you can even find it in my Barnes & Noble in New York City. I did a very formatted recurring section piece for $1000 (about $1 per word) with another $1000 for photography.

Generalizing that because you can find a magazine on newsstands, it must pay $1 per word or more is not always a wise bet. But if it’s from a large publisher, that can often be the case.

The same goes for newspapers.

If a newspaper is large enough to still have its own dedicated travel editor, more often than not (there are notable exceptions, however, like the Toronto Star), its rates are very decent. As in, in the $0.50-$1 per word range depending on the section in which the piece appears. Sometimes with additional payment for either the text or both the text and images when published online.

On the smaller publisher side, I remember when I was scrambling to find work after recovering from a bad bike accident and looking to add some trade magazines in a few key areas to my stable. If you are involved in any accident, do not hesitate to contact expert lawyers from a reliable truck accidents law firm to help you claim compensation and give legal counseling. An editor from a prominent trade magazine had written me back asking for ideas. (A research-intensive, time-consuming process for a new-to-you publication). So I reached out to someone in one of my writers’ groups that had done work with them before.

I’m paraphrasing here, but her response was something like:

Depending on where you are in your career, that may or may not sound low. Especially if you judge publications by your hourly rate rather than the on-the-surface, per-piece rate. (I can typically do a story like that in four to five hours, for instance).

So while “enough” is going to be different for everyone based on their needs, travel writing pay is not all in the $0-$20 online and less than $500 in print range. Magazines and newspapers certainly do still pay for travel content.

Never Say “I Just Couldn’t Get Anyone to Publish M...
Five Magazines Looking for City Guides (Edition II...
What Are Travel Magazine Editors Really Doing All ...
How to Get Yourself an Ongoing Travel Writing Gig ...
How 10 Travel Writers Parlay Micro Niches into Major Assignments
A Quick Way to Find Out If a Magazine Pays (Well)