A Quick Way to Find Out If a Magazine Pays (Well) 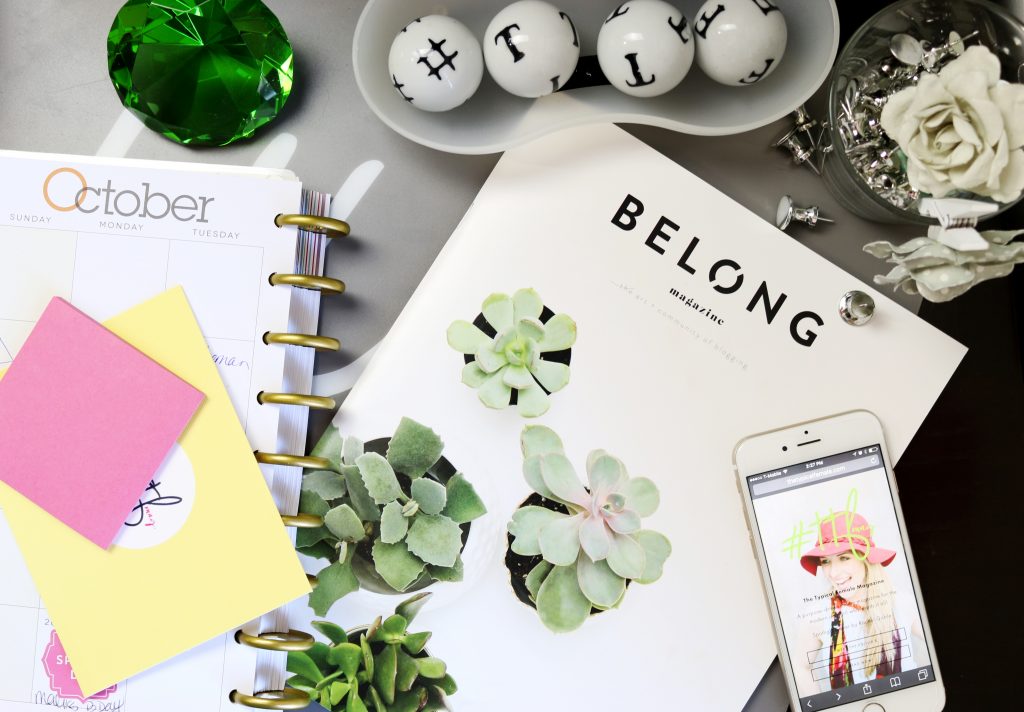 When you pitch a magazine that hasn’t been referred to you as a viable market by another freelancer or been verified in a magazine database like Mediabistro’s How to Pitch guides, Wooden Horse Publishing (now sadly deceased), or the Dream of Travel Writing Travel Magazine Database, you can run into a real problem.

You get an assignment. You write the article. And then you find out the magazine pays peanuts.

(This is a great reason to make sure you have a contract before you start work on an assignment. More on that here.)

Honestly, you would not believe how many professional, full-time writers this happens to. Even those who do due diligence. And especially when the magazine seems to have cred. It’s happened to me “alla grande” as we say in Italy.

Most legitimate publications will either send you a contract right away when they offer you an assignment, or, at least, say something like:

Then it’s up to you to say:

I had the weirdest experience once with what I thought was a very respectable newsstand magazine, however.

The editor-in-chief and publisher, who was in California, called me when I was out to brunch with family on a Saturday in New York City (so extrapolate how early it is for him to be making this call) to ask if I could do a piece that I had pitched on a rush, getting it to him in about a week. 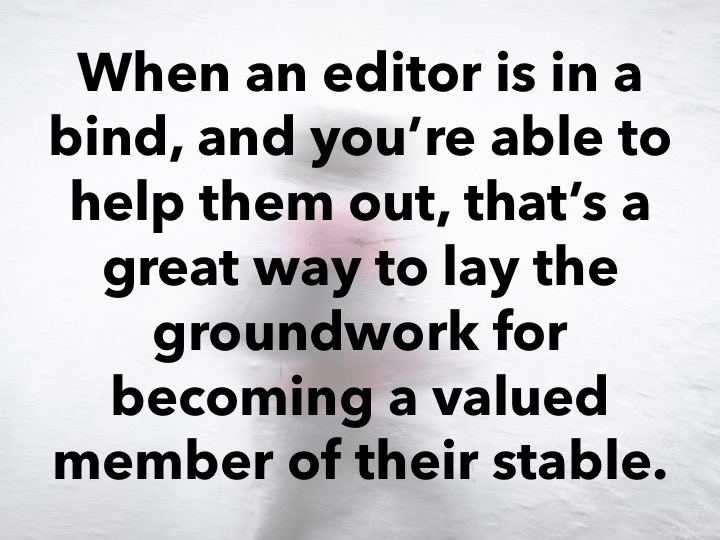 Usually, though not in this case.

We didn’t talk about the rate on the phone, but rather what research I would now need to carve out time to do, as I was trying to keep the call brief, I told him that I had time to go to the town the story was about, and asked if he needed photos. He said that he usually gets them from the places included in the article, but if I could shoot them, then to send those along.

As the week went by and I did my research, I received neither a contract nor the editorial guidelines from the publication. I emailed the editor I had initially contacted with the pitch to ask for them. Finally, I called (or perhaps he called me to check in? I’m not 100% certain) the editor to ask what was going on. I got the guidelines, which were extensive and required me to rewrite a fair amount of the piece after the deadline and sent my piece off.

He got back to me the next week to ask me if I could shoot some more photos—the same photos he told me that I didn’t need in the first place. The photos that were shot several hours from where I lived, fact I reminded him of when I said no.

Without hearing anything else from him, I found the article in the magazine one day when I was in Whole Foods. I reached out to him to ask about invoicing and getting a copy of the issue, which, after some delay of course, was when he told me:

The pay is minimal ($50) and the publishing rights to the piece revert back to you after 180 days. Of course you can use the piece for your own promotional purposes immediately.

I apologize for this falling through the cracks. I lost my editorial director recently and we are quite overworked at the moment (hence I’m replying to this past 6pm on a Sunday night).

Gabi, you were great to work with and I’d love for you to consider additional pieces. Features start at $500, FYI!

Unsurprisingly, I never received either the “minimal” check or the copies of the issue.

Now, please stop yourself right there from chiding me for not pressing about this information sooner.

To be clear, I had plenty of other income, and it wasn’t a huge deal to take a gamble with this publication. I also was interested in developing a relationship with this publication, which I had read for years, and was happy to help the editor out in a pinch (I know he had just lost two editors around the time this happened and was scrambling). It was also a really beautiful clip in terms of layout, and I was highlighted in a profile in the “featured contributors” area with the masthead.

What really got me was that the pay for this section was so out of whack with the rest of the publication. And that for basically no pay in the first place he thought it was appropriate to send me out to take more photos.

I would expect this from an online magazine with an inflated sense of “the exposure” they provide. Not a respected publication with a brick and mortar office and staff.

How Can You Avoid Letting This Happen to You?

In some cases, like the publication above, you can be blindsided by a publication having internal issues that affect its work with contributors (I later learned that this editor/publisher was being sued by his soon-to-be-ex-wife for control of the publication and that was why he had suddenly lost his staff).

But there is one, almost full-proof way to get a ballpark of how much a magazine pays freelancers.

Find out how much the magazine makes.

There is probably a publisher-side database that you can have access to much more of this information in, but there is also a quick and easy way to figure out if they have healthy cash flow: check the advertising rates.

More often than not, there is a tab on the main menu called “ads” or “advertisers” that will take you to the magazine’s rate kit, but you can also often just Google “[magazine title] magazine kit” to find it quickly.

A quick Google of 7 publications that I know have healthy freelance rates shows: 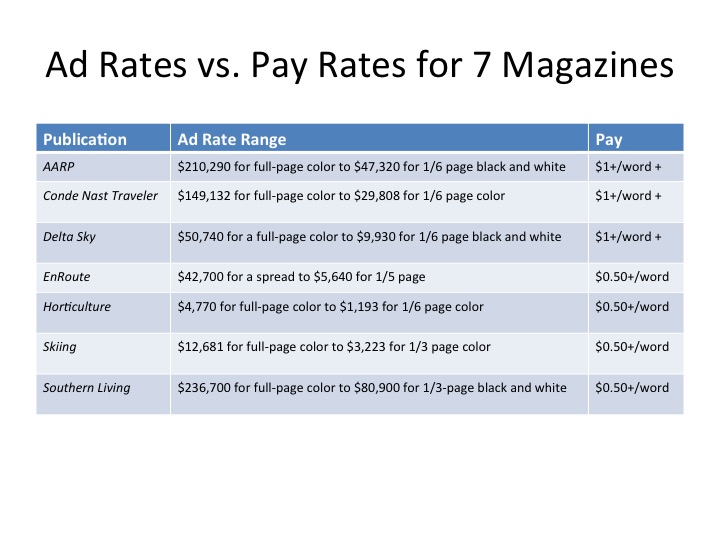 These publications have money.

With the ad rates, you can actually pick up a copy, count the ads, and roughly calculate how much the publication pulls in per issue before costs. This logic also applies for smaller publications all the way down the scale.

Note that a lot of regional or custom publications charge more than “huge” travel magazines like Conde Nast Traveler, and it’s common for your rate, especially the hourly rate, to be much higher for publications like this as well. 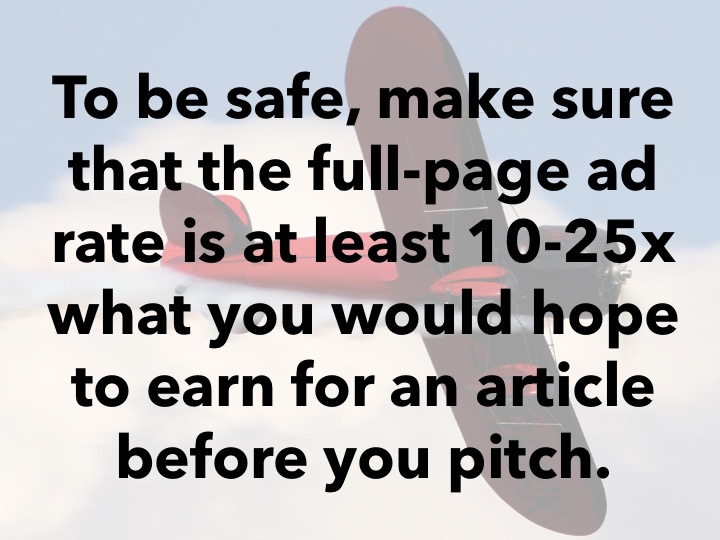