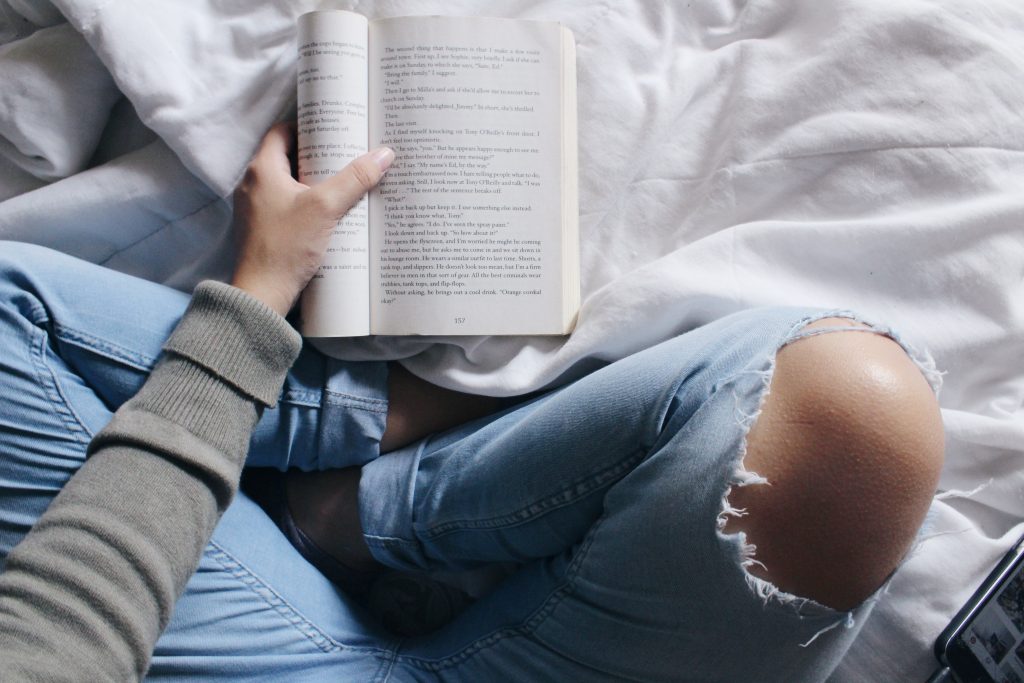 One refrain that I’ve heard repeated over and over again in different industries (book publishing, magazine writing, business management) is the importance of “keeping your cup full” through reading.

The idea is that, if you feel like you are out of ideas or inspiration, or suffering from imposter syndrome or an actual knowledge gap between you and what you want to do, the answer is always reading.

Not the web, but actual books.

Warren Buffet famously keeps his entire schedule clear to read and think. Book editors and agents spend tons of their time outside of the office reading to keep their finger on the pulse of the industry. My friend Chris Guillebeau, a multiple New-York-Times-bestselling author himself, told me he usually reads about 50 books a year, primarily novels.

Reading more makes you a better writer. This is indisputable.

Even beyond that wholesome, “we all know we should” reason though, there was something else that drove me to try to switch full scale into books. It’s an issue that I’ve had with reading on the web that I’ve experienced with video content as well.

When you’re watching an episode of a TV show or videos on YouTube (where I can often be found late at night catching up on episodes of the hilarious British chat show Graham Norton where you get to see huge celebrities in odd combinations being very real people), there’s always the options for more.

Both in terms of clicking on a recommended video, but also because there isn’t a neat conclusion or sense of completeness like you get with a movie. (Well, most movies. Not, for instance, the endless stream of Marvel sequels.)

I find reading on the web the same way.

If I’m reading about a topic that I want to know something about, I run into two things:

Being something of a (not-always-successful) productivity nazi, I like to keep myself from temptation as much as possible to save my decision-making power for more important decisions.

So I decided to change my information-consumption habits basically from one day to the next this summer.

Over the winter holidays, I had built up my reading muscles a bit more than usual due to having long flights to India in which I consumed several books, but I didn’t get into replacing my “entertainment” information consumption with books until a trip to Sweden and Denmark this summer where, in the lands of epically long days, it was simply so much nicer to be outside until 11pm than inside.

My husband and I were on holiday for the Fourth of July–him–and my birthday–me, and we decided to both read an Agatha Christie book together..well, at the same time, but on separate phones.

The problem is, due to having an undergraduate degree in (Italian) literature that required me to read two to three entire books in a somewhat regular week for seminars, I’m accustomed to reading entire fiction books in one sitting. (I can’t say the same for non-fiction, as you’ll see from my book lists below).

So while he was still reading the first book we selected, I read something like four or five over the days we were in Stockholm together before our respective work weeks began again.

Agatha Christie has only been outsold by Shakespeare and the Bible, so she’s clearly done something right, and I set about an informal study of her work.

I mentioned this in last week’s newsletter and blog post on habit change, and some folks were curious about what I’ve been reading, so I wanted to share the list with all of you in case it gives you some ideas.

You’ll no doubt notice that the list is both quite eclectic and has a heavy focus on business topics.

If that’s not your speed, I highly recommend checking out some of the non-business books on the list, particularly the small bit of non-Agatha Christie fiction I’ve allowed myself to binge read, because those books are excellent, along with the narrative non-fiction The Year of Living Danishly, from a lovely British journalist and travel writer who has built an enviable freelance career in a very short time and details those steps in her book.

The books are listed somewhat chronologically, as that’s how they show up in my Kindle if they’re still on my phone, but I’ve also grouped them by author or related topic where appropriate and included a second list of the books that I’ve read a majority of but not quite finished yet. (There are several more that I’ve only read about a chapter of, but that is less telling I think of how much I enjoyed them!)

Books I’m Still in the Process of Reading This Year

How to Pitch Five Magazines Looking for Activity P...
Is Your Freelance Travel Writing Career Closing It...
The Average Day in the Life of a Travel Writer
Now Open On-Demand, Whenever You Need It: Our Revo...
Become an Author with Our New Webinar Series on Non-Fiction Book Deals
Tourism Boards Really Need Your Help Right Now